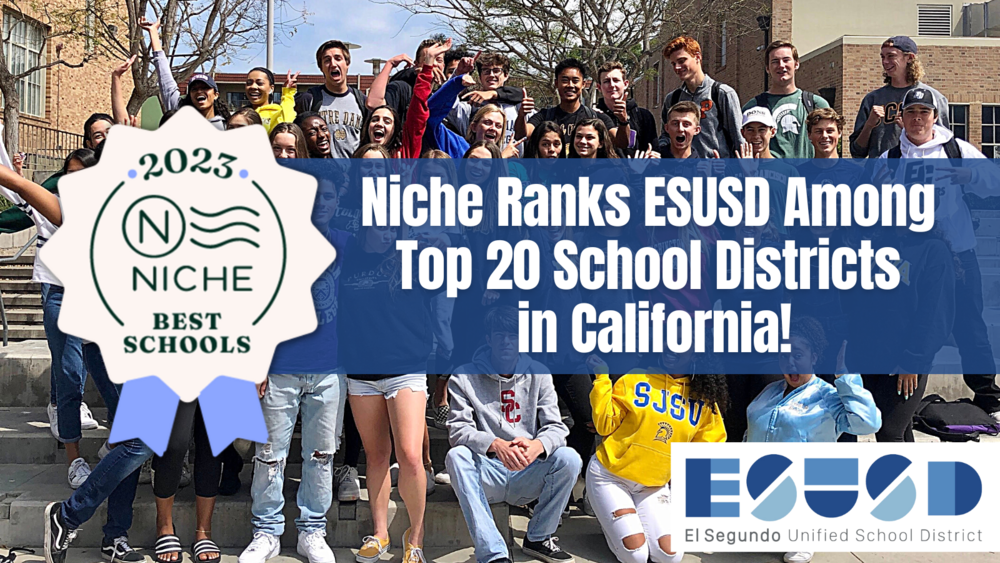 The El Segundo Unified School District has been ranked as the 19th best in California and in the top 1 percent nationwide on the 2023 Niche.com K-12 Schools Report Card.

The website compares and ranks more than 11,000 school districts across the United States based on a rigorous analysis of data and reviews. The Niche 2023 Best School Districts lists is segmented into national, state, and local rankings, and ESUSD holds notable spots at each level.

“We are incredibly proud of our rankings on this year’s Niche.com lists of the best schools and districts in our state and across the country,” said ESUSD Board President Tracey Miller-Zarneke. “While there is much more to our district than high rankings, this news is a big point of pride for our entire community. On behalf of the Board, I want to thank our incredible teachers, students, families, and administrators for everything they have done to make El Segundo Unified such a thriving place to learn.”

Niche arrives at its rankings by analyzing key statistics and data from thousands of schools. It incorporates information from the U.S. Department of Education and reviews from students and parents. Factors also include state test scores, college readiness indicators, graduation rates, SAT and ACT scores, teacher quality, and the overall quality of the school district.

For each school’s profile and a full list of the 2023 rankings, methodologies, and data sources, visit www.niche.com.