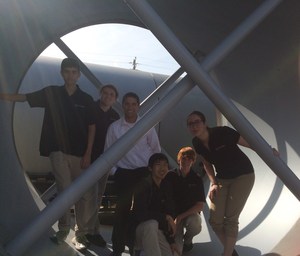 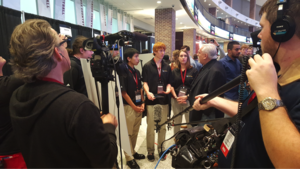 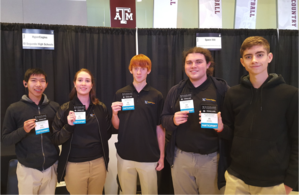 When El Segundo High School 2016 graduate Gavin Glynn first enrolled in the Engineering Pathway prior to his freshman year, he never dreamed that by his senior year he would be leading a team of ESHS students competing in the SpaceX Hyperloop Pod Design competition at Texas A&M University. Click headline for more.

"Participating in the Hyperloop Pod Design challenge during my Engineering Pathway Senior Capstone Project taught me that anything is possible,” said Glynn. Now majoring in mathematics and studying mechanical engineering at the University of California, Santa Barbara, the freshman is enthusiastically preparing for his dream job – the chance to work for SpaceX.

Glynn served as ESHS team captain and structural engineer on the project, leading a team of five seniors in the prestigious competition last January featuring Elon Musk’s futuristic high-speed, mass transportation brainchild. The HyperEagles enjoyed the “celebrity status” earned as one of only three high school teams selected by SpaceX to compete against more than 120 university and private sector teams from 26 states and 20 countries.

The engineering students were challenged at every turn and learned quickly that, with limited resources, finding mentors and partners is a necessity. They worked with seasoned engineers from the local aerospace industry, as well as with recent engineering graduates from UCLA. “The key is asking for help; I think that’s why we progressed so far with our design,” Glynn said.

Guided by then ESHS Physics Teacher and alumnus Steve Eno, the HyperEagles worked on the air compressors and other systems to propel the Hyperloop Pod to reach speeds close to 800 mph. They also studied fluid dynamics to learn how the pod could harness on-rushing air to levitate. Glynn pointed out that these higher-level topics aren’t often studied until college: “This competition and other competitions that the ESHS engineering students have entered pushed us to do graduate-level work.”

Although they didn’t place in the competition, the team members received a highly complimentary letter from SpaceX judges encouraging them to further develop their design, leading to the possibility that SpaceX would invite them to run their pod on the Hyperloop test track in the future.

“One valuable lesson I learned from this Pathway is how to tackle new situations. Everything we did was a first time thing for us,” said Glynn. “We learned a lot in the Introduction and Principals of Engineering classes. And, we were able to apply those skills to the Hyperloop Pod Design challenge, bringing a project to life in a real-world situation.”

As quoted by the Los Angeles Times, Glynn said, “We want to be an inspiration for other engineering students, or engineers in general, to do something big, and try something they might not have tried. ‘If they can think there’s a high school team doing that, imagine what we could do as well.’”

The ESHS Engineering Pathway is made possible through the great generosity of Chevron and ongoing support from the El Segundo Education Foundation. In addition, the curriculum is supported by the El Segundo Unified School District’s partnership with Project Lead the Way (PLTW). The pathway uses PLTW’s Engineering curriculum, empowering students to step into the role of engineers, adopt a problem-solving mindset, and make the leap from dreamers to doers. Each course in the Engineering sequence builds on the skills and knowledge the students gain in the preceding courses.

ESHS established four linked learning pathways in 2012 to motivate and engage students by connecting challenging academics to demanding career and technical education. Incoming ESHS students are briefed regarding pathway options at the incoming student orientation and may opt to enroll in a pathway course during the registration process. Students may try a pathway for one year and the next year choose a different pathway if they find it does not meet their future goals or interests. For more information on Project Lead the Way, please visit www.pltw.org.

Caption 2:  ESHS 2016 graduate Gavin Glynn (center) being interviewed by the media along with the HyperEagles engineering team at the SpaceX Hyperloop Pod Design Competition in early 2016.