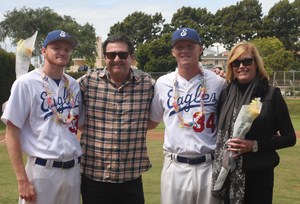 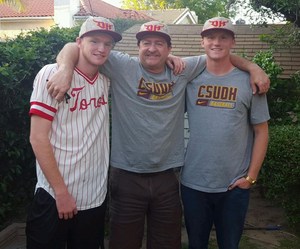 Fraternal twins Garrett and Wyatt Boyce have shared playing time on the baseball field since they were five years old. This month, the pitching duo simultaneously achieve another significant milestone as they become members of the baseball team at California State University, Dominguez Hills. Garrett (left-handed pitcher) and Wyatt (right-handed pitcher) signed their letters of intent to play at Cal State Dominguez Hills in April during their senior year at El Segundo High School after expressing a desire to attend their father Randy’s alma mater. Click headline for more.

Baseball roots run deep in the Boyce family. The twins father Randy attended Leuzinger High School and signed to pitch at Cal State Dominguez Hills in 1977. He was drafted by the Milwaukee Brewers in the 24th round of the 1978 MLB June amateur draft. The twins grandfather Robert Boyce was also a pitcher who opened his college season in 1949 at Northern Illinois University with a no hitter. The WWII veteran (1943-45) was awarded a Purple Heart and two Bronze Stars for his service to the United States. After returning from the war, Robert signed with the Boston Braves in 1946. He played with the Braves one season before he decided to return to college for a couple of years. Immediately following his 1949 season at Northern Illinois University, Robert signed with the Rockford Reds, a Cincinnati Reds affiliate.

As Garrett explains, “I liked baseball even before we knew our dad played!” The twins said they found out in fifth grade that their father had played professional baseball when he showed them a Milwaukee Brewers baseball card with his picture on it. “Our parents have always encouraged us to choose which sports we wanted to play,” said Wyatt, who also played basketball before focusing on baseball.

When the time came to think about college, the brothers discussed the different scenarios and had accepted the fact that they would most likely attend different colleges. “It turns out we are lucky to have the opportunity to be able to play together at the same college,” said Wyatt.

“During my senior year, I had emailed Cal State Dominguez Hills Assistant Coach Bill Erickson to express interest in playing there and found out he was already watching us and some of our El Segundo High School teammates,” said Garrett, who at 6’ 5” has height on his side on the pitching rubber where he is a left-handed hurler like his father.

As the brothers were gaining interest and fielding offers from several colleges, they were also deciding what key factors would help them make a decision. “We knew that Cal State Dominguez Hills has a good baseball program, and a big draw for us was the potential to get playing time as freshman and have an opportunity to make an impact during our first season,” said Wyatt, who is known for his stature and power at 6’6” and 230 pounds. “Cal State Dominguez Hills is known for recruiting South Bay talent because the players come from strong baseball programs like the one in El Segundo.”

Garrett and Wyatt are proud of their baseball heritage. Both have an eye on playing professional baseball like their father and grandfather. As for the immediate future, they are ready to put all of their training and hard work to the test as they prepare to begin their college careers this fall.

In twelve years of playing baseball together, the brothers were on different teams only one time during their last season of little league. They view playing together as a friendly competition—and rivalry. “I always have someone to compete with and to push me to improve,” said Wyatt. His brother simultaneously chimes in, “Whether we are getting along or not, we always have a best friend and support system on our team,” said Garrett.

Who’s older: Wyatt, by one minute.