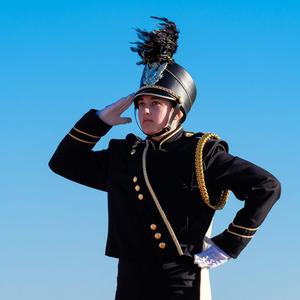 Delaney Cadman will attend the University of Michigan, Ann Arbor this fall as a biology major. Her love of travel and desire to broaden her horizons spurred her decision to attend an out-of-state school. She is passionate about making contributions in medicine and plans to attend medical school in the future.

Delaney enrolled in the Biomedical Science Pathway and it quickly became one of her favorite classes. “The pathway helped me grow to love medicine,” she said. “Mrs. Tucker would always bring her own experiences as a professional nurse and it helped translate what we were learning to real-world experiences. And, Ms. Maisonet is a research scientist who brings a wealth of professional experience and knowledge to the pathway classes.” Delaney believes the pathway provided her with a great foundation heading into college. “The fact that ESHS offers these in-depth career pathway options is a very rare opportunity and I’m grateful for the Biomedical Science Pathway.”

A clarinet player since the fourth grade, Delaney has been a member of the  Eagle Marching Band for four years. Through an extensive audition process and nominations by her band member peers, she was honored to be selected as the drum major for her senior year. She served as assistant drum major during her junior year. According to Delaney, there has been at least one female member on the drum major team at ESHS each year she has been in band. “The strong female leadership in drum majors for the ESHS Marching Band has made me feel empowered in all facets of my life,” she said.

The Eagle Marching Band has earned many awards and accolades in recent years. In 2019, they competed for the first time in the Western Band Association’s Grand Championship. ESHS placed third among the 2A division bands. “ESHS band members put our hearts into our marching shows and we love supporting each other,” she said. “Winning is just one part of it; the true reward is the relationships that are formed and having the best time with fellow band members.” She says she will most likely audition for marching band at the University of Michigan.

Delaney’s favorite memory from ESHS is her time at band camp each summer. “While it is very grueling and a lot of hard work, it is also so rewarding because you become so close with your band mates.”